Selma Wretman was ranked as number 11 among the girls who were confirmed in St Jacob’s church in May of 1844 because her father, Fredric Wretman (1791-1857), although not having an important title, was a wholesale merchant with considerable wealth.

Selma was born in Maria Magdalena parish on May 16, 1828. Her mother was Charlotta Fredrika Björling (1795-1890) and she had an older brother, Fredric, and a younger brother, Johan. In 1834, the family lived by Slussen in Stockholm, in a block named Mälaren.

By 1844, the family had moved to Stora Trädgårdsgatan 19 (what is now Gallerian, an indoor shopping center across from the famous department store, NK). In the census records for this year, Fredric Wretman also noted that he was a part-owner of two merchant ships. The other owner was Fredric Sievers who married Selma’s confirmation friend, Johanna Maria Wennberg.

In 1846, Fredric Westman bought a large stone house on Hamngatan 16 with a great view of Kungsträdgården, the expansive park in the center of Stockholm. It was next to an old palace (Sparre’s Palace) which housed a charity home for widows and daughters of the bourgeoisie. Selma would live with her family at Hamngatan 16 most of her life. When Selma married Waldemar Wretman in 1851, Waldemar moved in and they would raise their children in this house. Selma’s mother inherited the house when her father died in 1857.

The house to the right is where Selma lived, Hamngatan 16. The next house (which looks like two houses) is Sparre’s Palace. And the big house in the middle was built in 1866 as an art space for exhibitions and studios. Teodor Blanch opened a cafe on the ground floor in 1868. Photo by Carolina von Knorring (1868-1873).

Waldemar (1820-1891) and Selma were both first and 2nd degree cousins. But instead of continuing the family tradition of being a wholesale merchant, Waldemar studied law at the University of Uppsala and eventually became a justice of the Swedish Supreme Court (Swedish: Justitieråd) in 1860.

Selma lived a traditional life as a wife and a mother. She gave birth to (as far as I know) 5 children:

The two youngest girls, Sigrid and Walborg, were born at Kratsboda, the family farm in Bromma parish outside Stockholm. They were both born in the summer and one possible explanation for them not being born in Stockholm might be that with recurring cholera outbreaks in the city, it was safer to give birth in the countryside. Sadly, both girls died as infants from diseases that are now preventable and treatable with vaccines and antibiotics. 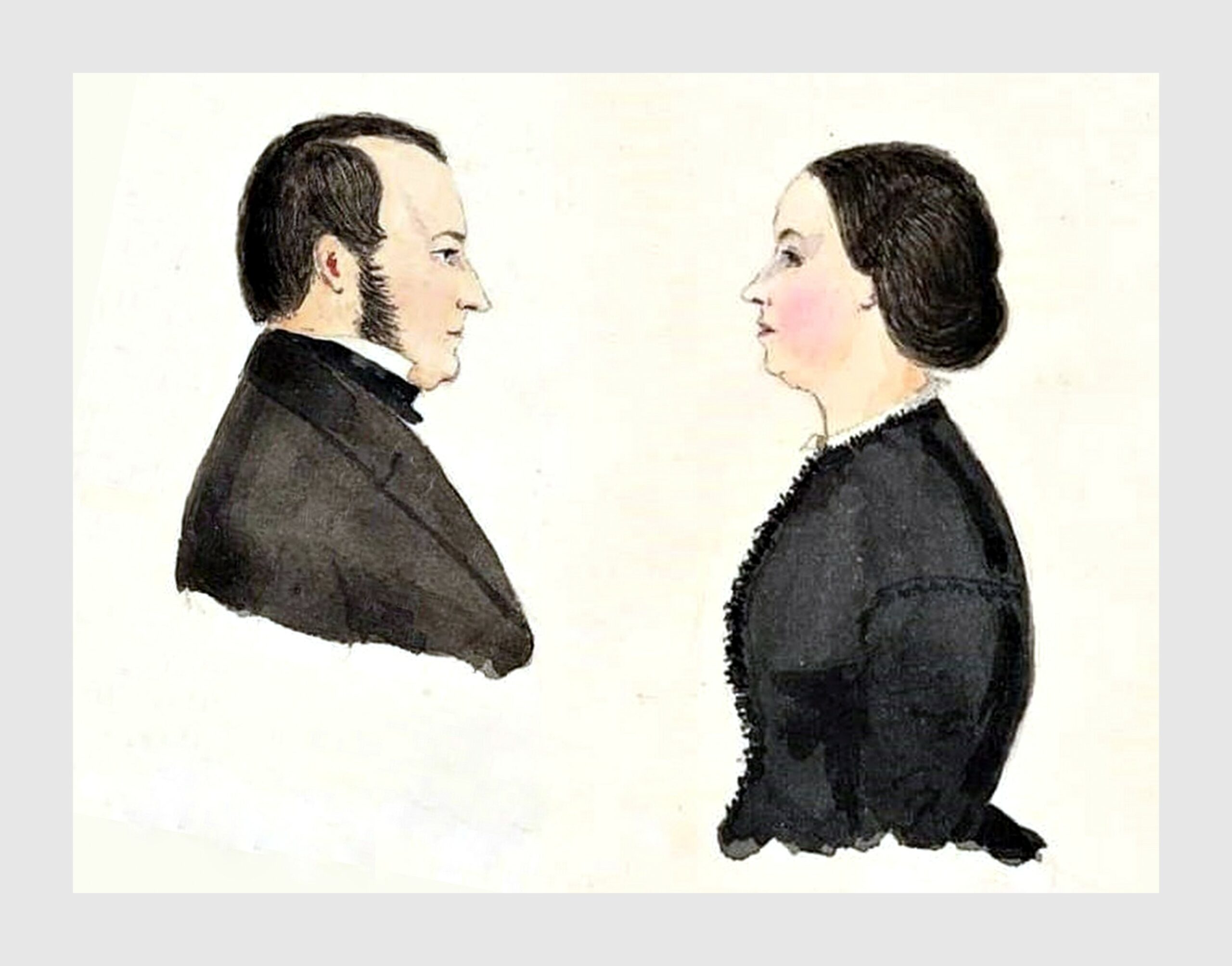 Waldemar and Selma Wretman in 1864. Watercolors by Claes Fredrik Laurén.

When I tried to find images of Kungsträdgården from the mid-1800s and images of their house, I instead found many of Blanch’s café – an establishment I was not familiar with. When I read about it, I could imagine Selma’s daughter Anna being just the right age to enjoy it:

The year is 1871 and two girls are walking home from St Jacob’s Church in Stockholm. They have just attended the confirmation class with Pastor Lundberg. Anna Wretman and Clary von Schwerin are walking through Kungsträdgården – the Royal Garden – the large park in the middle of Stockholm.

When they get to the end of the park, they decide to have a cup of tea at Blanch’s Café. It is the most elegant café in Stockholm and it is the place to watch people and to be seen. There is a band playing and they get a table far from the cigar-smoking men who are having a lively discussion. Finally, Stockholm has a café that can measure up to those on the continent. And once it gets warmer, they will be able to sit outside in the park and it will be even livelier.

Anna lives just across the street, in a stately house at Hamngatan 16. She has always lived here, playing in Kungsträdgården when she was younger, and she could not imagine living anywhere else. Even her mother, Selma, lived in this house when she was the same age. And like Anna, she had also walked to St Jacob’s Church to attend confirmation class. But of course, there had been no Blanch’s café at that time!

Teodor Blanch was a German entrepreneur, restauranteur, and art dealer. After having been the restauranteur of the famous Opera Cellar (Operakällaren), he had the brilliant idea to establish a café in Kungsträdgården. It would be as grand as those in his hometown of Berlin, with both indoor and outdoor seating. The waiters would wear tail-coats and white tablecloths added to the elegance of the café. There were crystal chandeliers and tropical plants.  And, of course, there would be concerts and music all year around. When Blanch’s café opened in 1868 it transformed the social life in Stockholm. Ten years later, Blanch was one of the first restaurateurs who installed electric light! 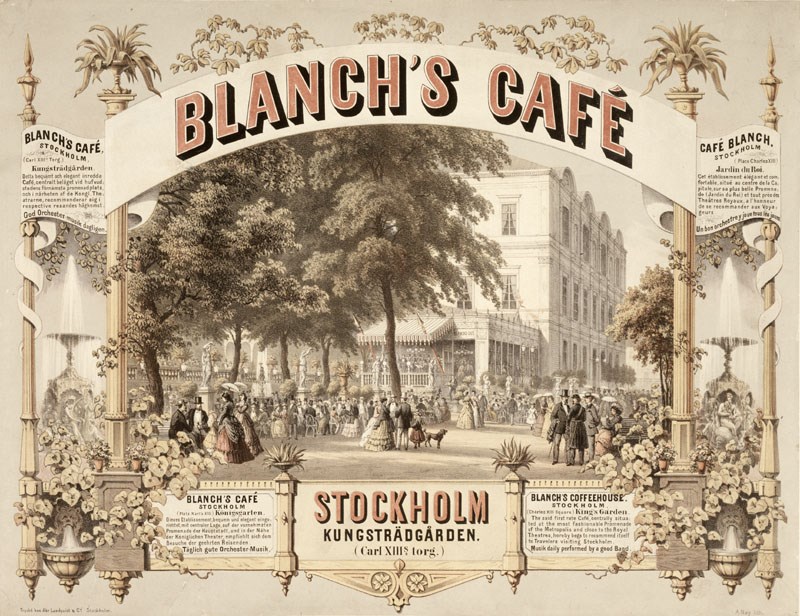 Blanch’s Cafe. Based on a lithograph by A. Nay. This view could have been from the Selma’s front door at Hamngatan 16.

The original lithography from the 1870s

So what happened to Selma’s house at Hamngatan 16? Well, first, a few houses in the same block (the block named Hästen) were demolished for the NK department store. I have previously written about Augusta’s friends, Augusta Holmqvist, Eugenia Björkman, and Charlotta Salomon, who lived in those houses. Selma’s house and the house next door (Hamngatan 14) were spared and bought by the brothers Edvard and Robert Sager in 1888. The houses were beautifully remodeled and became known as the Sager Houses.

In the 1960s, the city government decided that the two houses should be demolished to provide space for a new bank building. Many opposed these plans and called for the houses to be preserved for their historical and architectural significance. Despite the public outcry, the houses were demolished. 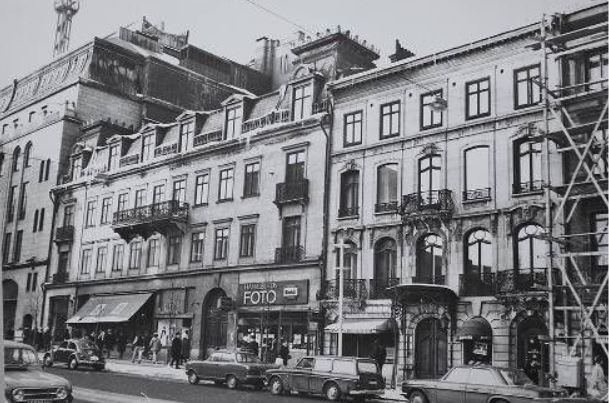 The department store NK on the left, Selma’s house (Hamngatan 16) in the middle, and Hamngatan 14 on the right. The two houses were referred to as the Sager Houses and later demolished.

Kungsträdgården, probably about 1859-1860 (The large house on the right is Davidson’s House which was finished in 1859. As there is no grove of elm trees in the park, the photo must have been taken before they were planted around 1860.) Photo from Stockholm City Museum. At the end of the park, the house furthest to the left, and partially hidden by St Jacob’s Church, is Selma’s house, Hamngatan 16.

“to imagine, quite vividly… “

I was delighted to discover that Selma has descendants today in Sweden. Maybe they have a family archive with diaries and correspondence?

It was Selma’s son, Johan, who had a family and children. But the most fascinating discovery was that he wrote a handbook on Swedish genealogy which was published in 1916 (Swedish title: Kort Handbok i Svensk Släktforskning). It might even be the first published handbook in Sweden on how to find your ancestors?

And this is what he wrote:

If the researcher also have access to documents that provide information about more important stages in the lives of the deceased, estate records – drawn up at their death, or letters to and from them, which together with written or oral family traditions give knowledge of their characters and inner life; then it becomes so much easier, with the help of some imagination – if one has been bestowed with that gift – to imagine quite vividly, how these ancestors in their time worked and lived, married and gave birth to children, rejoiced and suffered, and finally, early or late, passed away.

So here is to Johan Wretman – I hope he would have approved of me imagining his sister Anna visiting Blanch’s Café on her way home from St Jacob’s Church!

Selma’s daughter Anna also attended St Jacob’s Church and was confirmed in 1871. She was ranked as number 1 of the girls in the confirmation class that year, because her father was a justice of the Supreme Court. Her friend Clary von Schwerin was ranked as number 2, because her father was a count, Count Fredric (Figge) Bogislaus von Schwerin. Her father is mentioned in our Augusta’s diary:

Monday morning I went to visit Ribbingens and Bohemans. They were overly astonished to see me so unexpectedly in the Capital City, and in the evening we saw the great opera, “A Tale of the Queen of Navarre.” There I met Count Figge Schwerin, who escorted me home and was quite himself, much disposed to let his lady alone carry on the conversation and himself look like he was sleepwalking.