Last week, I was reading the Swedish newspaper, Bohusläns Tidning, from 1845 and found an announcement listing the guests who had arrived at Gustafsberg’s Spa. The list included Augusta, her mother, and her brother. I got curious about the other spa guests. What could I find out about them?

I decided to start with what seemed to be an important family, the family of Krigsrådet Carl Jacob Salomon (A krigsråd was one of four civilian members of the Royal War Council. The other three members of the council were military leaders). Carl Jacob was not visiting the spa, only his wife and their two daughters and a son.

I assumed that it would not be difficult to find out more about this family. But it was!

Google was of no use. I didn’t even find the krigsråd himself! And Salomon is a very common name, both as a first name and as a surname.

Then I searched on free genealogy sites and in some books of important Swedish families and found only limited information.

I decided to get serious and turned to the census records of Stockholm for 1845. There I found the whole family with names and birth dates and an address: Regeringsgatan 38. That is where the famous department store NK is now located.

Now that I had names and birth dates, the search got easier.

Next, I turned to published contemporary diaries – those of Marie-Louise Forsell and Lotten Ulrich. They were both well-connected in Stockholm and both mentioned meeting up with the Salomon family.

“Maybe Carl has already told the news that our old dancer, the honorable man Wrangel at The Artillery, is engaged to the youngest Miss Salomon.” (Sällskapslif och hemlif i Stockholm på 1840-talet: Ur Marie-Louise Forsells dagboksanteckningar).

Jaquette married Count Tönnes Wrangel in 1848 and lived a long life and had 4 children. 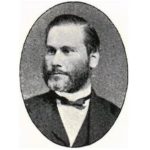 Ernst was even easier to find. He even had his own Wikipedia page. He became a medical doctor and specialized in psychiatry. He also married and lived a long life.

The only thing I could find about Charlotta was that she had died in 1856. Or at least, that is what two sources stated. I checked the church records for the Jacob parish in Stockholm, but there was no record of her having died in 1856. I searched the digitized newspapers for 1856 and there was no obituary either. I was running out of creative ways of finding her. Had she moved?

Yes, had they moved?

I realized that there was an online digitized card catalog of property deeds in Stockholm between 1675 and 1875!

Using the information from the census records, I started flipping through the cards until I got to Salomon’s address. Carl Jacob Salomon had bought the house in 1827. Then, every time someone in the Salomon family died, there was an inheritance record regarding the change of ownership of the house. The first one was when his wife died in 1846. Then he himself died in 1850 and, finally, Charlotta’s death was recorded as the 3rd of October 1855. At that time, Jaquette and her husband Tönnes bought the remaining share from brother Ernst.

I never knew that this archive existed or how useful it could be!

So Sophia Charlotta died in 1855 and not in 1856 as reported. Now I could find her death in the church records – she died from tuberculosis, just like our Augusta, at age 28. And I also found her obituary in the paper. She died at Harfva Gård in Ed parish northwest of Stockholm.

Likewise, I could now find mother Ulrica Sophia’s death in the church records. She died at age 44 on 4 July 1846 from edema. Her passing was also mentioned in the daily newspapers.

The death of Carl Jacob at age 65 on 6 February 1850 was announced in the papers but for some unknown reasons, there was no church record of his death in Jacob’s parish. Did he possibly belong to some other parish?

So what else could I find? What about portraits of the family members? In the 1840s, it was popular to have the artist Maria Röhl sketch you. Did the Salomon family commission her to sketch them? I searched on the Swedish Royal Library’s website and sure enough, found them all in 1847. That was the year after the mother had died. 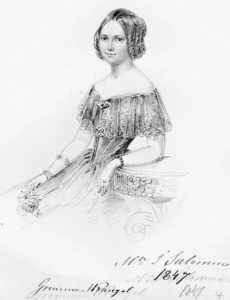 And then, Google just decided to surprise me. I don’t know what I searched on, but there it was – a daguerreotype of the family taken in the interior yard of their house with a sheet hanging as a backdrop. The picture must have been taken in 1848 or 1849 as Hilda’s husband Tönnes is included (they married in 1848) and before 1850 when the father died. 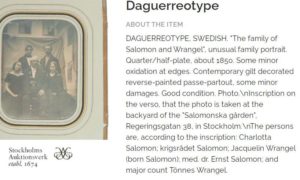 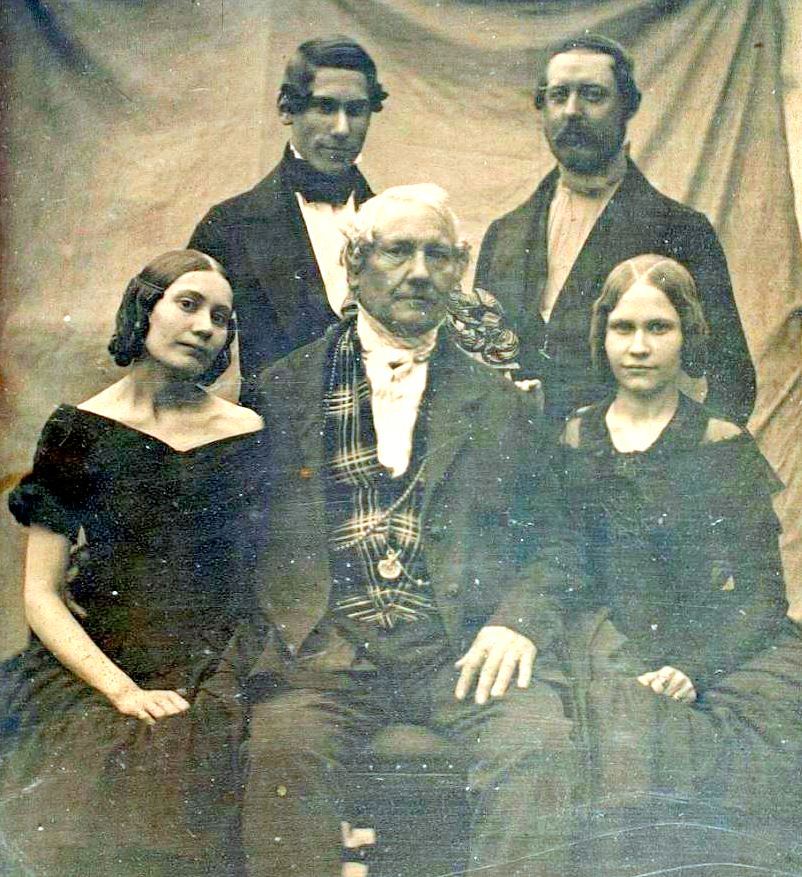 In the summer of 1845, when the family was arriving at Gustafsberg, were they excited to spend some time socializing at this fashionable spa resort? Were the girls curious about meeting young men that might be suitable spouses? Or was their mother, Ulrica Sophia, already sick and hoped that drinking water at the spa would help restore her health? Was Charlotta, who was the same age as Augusta, already ill with tuberculosis?

Unfortunately, Augusta had not started keeping a diary yet so we don’t know if she already knew the Salomon girls from Stockholm and if they socialized at Gustafsberg. The only correspondence we have, where she alludes to the stay at Gustafsberg, is a letter to her best friend Lotten about a young man she met and fell in love with. Nothing came of it, but it would be fun to know who he was.

Ernst Salomon can be easily be written off, he was only 14 years old.