It is a beautiful fall day and I am walking along Skeppsbron, a street with stately old houses that line the waterfront of the Old Town in Stockholm. For hundreds of years, these houses have belonged to rich merchants and traders.

The Old Town of Stockholm with the row of houses along Skeppsbron (Watercolor by Carl Fredrik August Cantzler, 1843)

Skeppsbron should really be seen from the waters, but this day, I was wondering what the view would have been from one of these houses in 1845. And particularly one, Skeppsbron No. 30.

I also wanted to step into the world of 18-year-old Johanna Wennberg as she was walking along Skeppsbron. I know how it feels to walk in a Victorian dress with layers of starched petticoats that rustle when you walk, and with a fashionable shawl to protect you from the wind. The bonnet would protect your hair and signal your class in society. So it is easy to imagine Johanna as she would be walking to visit her husband at his office in the impressive house at Skeppsbron 30!

The Customs House at Skeppsbron 38 (Ferdinand Tollin, 1841). Skeppsbron 30 would be a few houses to the right.

The house at Skeppsholmen 30 is still standing, although the façade and the roof of this house have changed since 1845. So with the more modern look, you have to try harder to imagine that this was where a young German wholesale merchant, Ferdinand Sievers, was building wealth for his growing family.

What would he have seen when he looked out the windows? The bay would be full of sailing ships with cargo to be unloaded. And some of that cargo would be his!

Johanna Maria Wennberg was listed as number 15 of the girls who got confirmed in St Jacob’s church in May of 1844. Johanna was born on January 2, 1827. She was the first child of Johan Anders Wennberg and Maria Elisabeth Sjölander.

Johanna’s father was a wholesale merchant but came from a long line of bakers. Johanna’s grandfather, Anders Wennberg, was a master baker and owned the house at the corner of Regeringsgatan and Jakobsbergsgatan in Stockholm. The house was next to the home of the Preumayr family whose daughter, Sophia Augusta, I wrote about in a previous blog post. When Anders Wennberg died in 1827, his four sons and their stepmother inherited the house. One of the sons carried on with the family bakery, one became a brewer, and two became wholesale merchants.

In the mid-1800s, many wholesale merchants lived in the southern part of Stockholm, Södermalm. It was close enough to the Old Town and the famous Skeppsbron with its trading houses. Johanna’s family was no exception. She grew up with lots of brothers and sisters in a house at Södermalmstorg No. 8.

View of Stockholm. Johanna and her family lived in one of the houses in the left corner, at Södermalmstorg No. 8. The bridges and walkways in the foreground are what is now Slussen (Watercolor by Carl Fredrik August Cantzler, 1843)

According to the 1844 census records for the Wennberg family, there were also 3 other wholesale merchants living in the house, and one of those was Ferdinand Sievers.

Did Johanna fall in love with Ferdinand Sievers, the young wholesale merchant from Lübeck, or did her father think that Ferdinand would be a good son-in-law, a very suitable young man with a bright future?

All we know is that Johanna and Ferdinand got married in Maria Magdalena Church on August 2, 1845. She was 18 and he was 27.

Life was good. Ferdinand and Johanna moved to Wollmar Yxkullsgatan 22, still at Södermalm and not too far from where Johanna had grown up. And Ferdinand had an office at Skeppsbron 30, where he could keep an eye on the tall ships arriving with his cargo, like bales of coffee that came from Rio de Janeiro and Java, and barrels of sugar from Pernambuco – products that were in high demand. He would advertise these products in the paper: 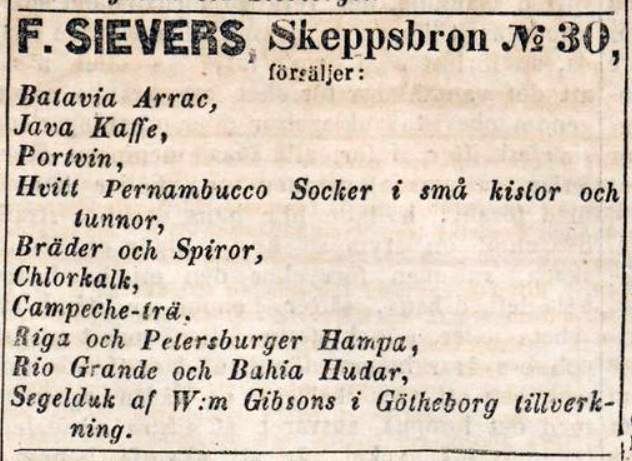 Other advertisements listed fresh lemons, coal, an assortment of chemicals, and lumber products.

Johanna was also busy, and the children kept coming. First, it was Johan Ferdinand, who was born on January 9, 1847. A year and a half later there was another son, Axel Theodor, born on October 7, 1848. And finally, they got a daughter, Maria Louise Mathilda, on February 1, 1850.

Then tragedy struck. A note in the newspaper announced that Ferdinand had died after a short illness. He died on April 22, 1851, only 34 years old.

Life as a widow

When Ferdinand died, his children were 4, 2 ½, and 1 year old. And, Johanna was 6 months pregnant. On July 26th, 1851, she gave birth to a daughter, Johanna Augusta Elisabeth.

So what happened to her family and the business?

The business continued under the name Ferd. Sievers & Komp. At some time, the family moved to another address, Stora Badhusgatan 8, close to her childhood home. But the business address was still the same.

Johanna didn’t remarry. Her children grew up and all but her youngest daughter married. I could not find that the sons had any children.

The oldest daughter, Mathilda, married Jacob Bagge, who was the director for banknote printing at Sweden’s Central Bank. Her life mirrored her mother’s. Mathilda and Jacob lived with their 6 young children at Skeppsbron 40, close to where her father Ferdinand had had his business. And, just like her father had died young, Jacob Bagge died suddenly in 1892, at 44 years of age, from a heart attack.

Johanna’s youngest daughter never married but instead took care of her mother. They lived together at Blasieholmen 44. Johanna died on December 13, 1902, at 75 years of age from a stroke. The obituary listed children, grandchildren, and great-grandchildren.

I wonder if I someday will run into any of her descendants.