It was a beautiful day, finally. The last week of June had been unusually cold and windy and the relentless rain had flooded some streets. The women in the household, Sophia Augusta and her sister Mathilda, their mother, and their two old maids – Margaretha and Marie – had been forced to stay indoors for several days because of all this rain.

Sophia Augusta had felt sorry for her father and all the soldiers who were camped out at Ladugårdsgärde. She couldn’t imagine how it would be to sleep in a tent and then have to be out marching in weather like this. How could you even practice warfare in rain?

Her father could at least come home at night. He had the most admirable position. He was in charge of the music corps. And when he came home in the evening and told the girls about his day, about the close to six hundred singers from all the various regiments that he had to conduct, they had so many questions. How could you get them all lined up or did they stay in some formation? Or did soldiers from each regiment stay together so that it was visually pleasing as each regiment had a different uniform? What about the musicians? What instruments did they play?

And now, it was finally Sunday, the day Sophia Augusta had waited for, and there was not a cloud in the sky and just a light breeze. Getting to Ladugårdsgärde had taken some time as all carriages in Stockholm seemed to be heading in the same direction. Sophia Augusta’s father had told them where they would have the best view, and once they got there, they had even found some large rocks to sit on under the shade of a few large trees. Sophia Augusta looked through her binoculars – trying to find her father among the hundreds of singers and almost as many musicians with their shiny brass instruments. They were all positioned at the base of Drottningberget – The Queen’s Hill.

The rest of the expansive field was filled with soldiers from various regiments. She knew some of them by their uniforms. And then there was the cavalry with their beautiful horses! And there were flags and standards and she recognized the standard of the Svea Life Guards with its yellow lions and blue shields. And curiously, she could see a large group of girls from Dalarna – they stood out by their traditional clothing – mingling with the soldiers from the Dalarna Regiment.

Review of the troops at Ladugårdgärde (Drawing in Illustrerad Tidning, nr 26 the 7th of July 1855)

The program started at a quarter to 2, with the chaplain of the Life Regiment Dragoons, the cavalry in Stockholm, and two assisting chaplains leading the service. Sophia Augusta couldn’t make out what they were saying but when the hundreds of singers joined in the chorales and hymns, everyone joined in too. It was so beautiful! She didn’t want the service to end, and when it did, after more than one hour, she was still hoping that there would be some more music. But the chaplain raised his voice and exclaimed “God save the King and the country”, and she knew that that was it.

But then, maybe it was planned, but it felt like a spontaneous reaction by all who had come out to see the king and the royal family on this glorious day, they all took up the national anthem – God Save the King! Sophia Augusta saw the king stand up and then make his way down to view the troops. She just wished he would have been mounted on his horse – that would have been a sight! But, nevertheless, what a beautiful day it had been. And how proud she was of her father, having perfectly directed all the singers and musicians! 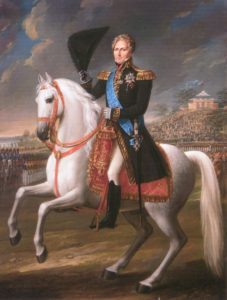 Sophia Augusta Preumayr was listed as number 14 of the girls who got confirmed in St Jacob’s church. The ranking was based on the pastor’s perception of the girl’s social status, based on her last name and her father’s profession. And Sophia Augusta had a very famous father.

Sophia Augusta Preumayr was born at home, Jacobsbergsgränd 14, in Jacob parish in Stockholm on December 1, 1827. Interestingly, a famous Swedish poet, Johan Tobias Sergel, was born in the same house in 1740. The house was demolished in 1943. 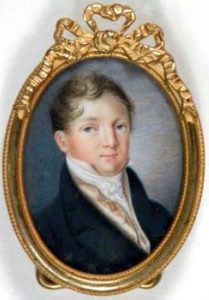 He and his two brothers, Conrad and Carl, were all extremely talented musicians who came to Sweden in 1802 to join the Royal Orchestra. Franz was considered to be the best bassoonist ever in Sweden. He was also a talented virtuoso. Later, he became director of the military corps of music, an esteemed choir leader, and a composer. His brother Conrad was just as talented but died at age 44. His brother, Carl, was foremost a violoncellist but took over the position of playing the bassoon after Conrad’s death. He was also employed as a singer at the Royal Opera. 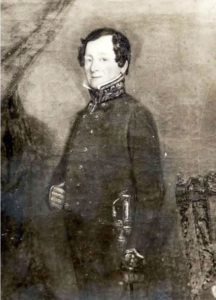 Franz married Sophia Crusell, the daughter of Sweden’s most famous clarinet player and composer, Bernhard Crusell. They had three children, Anna Mathilda, (b. 1822), Carl Bernhard Edvard, (b. 1825), and Sophia Augusta (b. 1827).

In October of 1829, Franz took off on a 1-year concert tour around Europe. He left his wife and his 3 young children in Stockholm. In his travel journal, he wrote the following on the day he left Sweden (Malmö, October 19, 1829):

“In a moment I shall be separated from Sweden, a country where I have all that in my life I hold dear, and I confess that it costs me indescribably much to leave it. Farewell, my dear Sweden! Farewell wife, children, parents, kin, and friends! May I soon get to see you all again!!!!!!!” (Translation, Agrell, 2015) 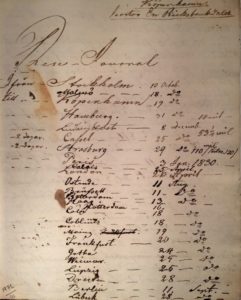 But as we know, Franz had a successful concert tour and returned home the following October. His travel journal is very interesting. He describes how he was at a private soiree and heard the 19-year-old Franz Liszt play the piano. He was utterly annoyed:

“…then a young man played, with the appearance of a real fanatic or a runaway and crazy student. Probably, what he was playing on the piano, accompanied by a violin and a bass, was his own composition consisting of an introduction, a theme with variations, and a menuette. His theatricals and his playing was the most affected I have ever experienced. He worked with his body so that the sweat ran from his forehead, he stared like a maniac with his eyes turned to the ceiling. Now and then he glanced at the ladies, probably to see if such high sensitivity and expression had been communicated.

For my part, I felt really bad about these endless follies and, with pleasure, I observed that even the audience, every single one, with visible impatience were waiting for it to end. Depressed and deeply annoyed at the fool, who I think is called Litz, if I am not mistaken, I had a hard time focusing on the following, twittering Italian Quartet.”

What happened to the children Preumayr?

Anna Mathilda was fortunate to have a collection of musical notes dedicated to her. In 1836, when she was 14, the 22-year-old German flautist, Carl Ludwig Heinrich Winkler, who had just joined the Royal Orchestra in Stockholm, published the following musical notes:

Francaises, Waltzes, and Anglaises danced in Stockholm in 1836, composed or arranged for Pianoforte and dedicated to
demoiselle Anna Mathilda Preumayr by C. Winckler.
32 skilling.

Maybe he was an admirer or maybe she was also a great musician and he wanted to show his appreciation. But even if she was good at playing the pianoforte, there would be no concert tour through Europe for her. She did what most girls did at this time. On December 18, 1845, she married the secretary of the Royal War Council, Lars Johan Rhodin. Two years later, on September 30, 1847, they had a daughter, Anna Sofia.

Carl Bernhard Edvard also did not have a musical career. He married Johanna Gustava Elisabeth Fogelström and became a director of the Swedish Telegraph.

And Sophia Augusta? What happened to her? Unfortunately, not even 2 months after becoming an aunt to little Anna Sofia, she suddenly took ill with stomach ache and fever. On the 21st of November 1847, she died from gastric fever, a catch-all name for diseases such as salmonella infections and typhoid. Her funeral was in St Jacob’s church where, 3 years earlier, she had been confirmed with the other girls. The funeral took place on the day that would have been her 20th birthday.

Sophia Augusta is one of those girls whose life was cut short and didn’t leave many traces – only birth, confirmation, and death records and an obituary in the paper. It is of course possible that there are descendants of her siblings who might have collections of letters, diaries, or portraits of her. I just imagine that she did have an exciting life with both her maternal grandfather and her father being famous musicians. I also imagine that everyone in the family played instruments and sang.

And I imagined that she went to Ladugårdsgärde for the celebration of King Carl XIV Johan’s 25-year’s rein.

Besides several newspaper articles describing this event, Lotten Ulrich and her sister Edla walked to Ladugårdsgärde the day before the event. Lotten writes in her diary that she was sitting by her window in their summer house at Gröndal on Djurgården and could hear the army bands rehearsing. She and her sister decided to walk over to Ladugårdsgärde to get a good view. They sat down on some rocks under two spruce trees and could follow everything with their binoculars. She wrote in her diary:

“It was a rehearsal before the service that was to be held in solemn forms the next day in the presence of the whole Royal Family. Five hundred singers with the best voices from all the regiments, led by the distinguished Mr. Preumayr, would sing hymns and the National Anthem.” (Östman, 2015)

Numerous articles in digitized Swedish newspapers describing the event at Ladugårdsgärde on 2 July 1843.

One response to “14. Sophia Augusta Preumayr and her Famous Father, Franz”